– Mark Driscoll, Who Do You Think You Are? Finding Your True Identity in Christ.

So, you guys. This weekend, while talking about my series with my husband, I realized I missed the point of the whole series a little when writing about Mark Driscoll. I don’t want to only vilify a fellow Christian. I jumped on the badwagon (<—typo that is a little too accurate..so it must stay) instead of using my voice to fuel peace and grace and mercy. And I'm sorry about that. Because this series is all about grace so I'm here to try again.

As it turns out, I've not read any of his writing…which I didn't realize until I thought about it yesterday…i've only read the angry words attacking him and quoting him on past sins, harsh words, misogyny, and anything else under the sun. It's bad form to criticize someone secondhand..that’s about when it becomes gossip. Ahem.

So I went to the library and I'm reading his most recent book: Who Do You Think You Are?: Finding Your True Identity in Christ

. I'm 50 pages in now and have yet to disagree with him. Not what I assumed. Somehow in all the criticisms they failed to mention the fact that this guy knows his Bible. I’m sure I’ll find something I don’t agree with him on before I finish the book, but I think better of him now.

Here are a few quotes thus far that resonated with me:

“You were created by God, are on the earth to image and glorify God, and when you die, if you are in Christ, you will be with God forever, imaging and glorifying him perfectly in a sinless state.”

Concerning the calvinist doctrine of total depravity:
“While it’s true that sin has affected the totality of our persons, including our minds, wills, and emotions, we fail to say all that the Bible does regarding our identity when we llace undue focus on iur depravity as fallen sinners and ignored our dignity as created image bearers and our new identity as redeemed Christian saints, while a non-Christian is totally depraved, a Christian is in Christ. Practically, focusing on just the sin aspect of our identity leads to despairing, navel-gazing Christians obsessed with their sin.”

“The Word of God is not a club for beating Christians until they emotionally bleed as repayment for their sin.”

“For the Christian, there is a vital difference between having sin and being sin. ”

– Mark Driscoll, Who Do You Think You Are?: Finding Your True Identity in Christ

We need to work on creating lines between what is actually criticism or accountability and what is really just gossip. We all mess up. Some in bigger and bolder and more visible and debateably “worse” ways than others, but God is still working through us and teaching us how to be more like Him. It’s way too easy to gang up on leaders when they fall off the pedestals we made and platforms they built. It’s all too easy to miss what God might be doing through someone else because of our own assumptions about the person’s motives, character, or salvation.

If we can think of fellow Christians’ actions as a more nuanced combination of good and bad, we can stop painting with the sweeping generalizations of “good” and “bad”. As the Church, instead of attacking and condemning and disowning, maybe we should be considering our reactions in the light of love, joy, peace, patience, kindness, goodness, faithfulness, gentleness, and self-control. Maybe we need to be a soft place to land after a hard fall from favor.

Do you think God is big enough for that?
—– 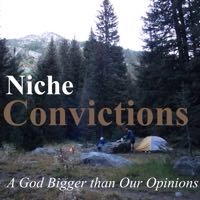